Warning! Top Secret Clam facts are about to be exposed.
This may cause jaw pain and extreme cases of
uncontrolled laughter.

All over the Internet, the latest questions in response to well-known controversies at alt.religion.scientology (ARS) seems to be, "What is this bit about clams?" "Why do people on ARS think this is funny?", and the ever popular, "Can I be in on the joke?"

Well, here are some answers to all of this and more. L. Ron Hubbard late in 1952 wrote a book called What To Audit, later renamed The History Of Man. The book is still sold by the Church Of Scientology and it contains many of the basic beliefs of the Church Of Scientology. It is considered by many connoisseurs of kook literature as a true classic of kook nonsense and it is well worth looking for this book in used books stores if you are indeed interested in a book that proves that there isn't anything so stupid that people won't believe in it if it's in a book.

L. Ron Hubbard in the introduction claimed it was "a cold blooded look at your last 60 trillion years." How could this be wrong? He also claimed his book finally proved the theory of evolution.

(Patience, we will get to them clams soon enough.)

The following excerpt from History Of Man is taken from the book Bare Faced Messiah by Russell Miller, a fine book for the neophyte Scientologist-watcher and clam afficionado.
Thanks also to Diane Richardson who originally typed this excerpt up and posted it to ARS.

In a narrative style that wobbled uncertainly between schoolboy fiction and a pseudo-scientific medical paper, Hubbard sought to explain that the human body was occupied by both a thetan and a 'genetic entity', or GE, a sort of low-grade soul located more or less in the centre of the body. To underpin his new science, Hubbard created an entire cosmology, the essence of which was that the true self of an individual was an immortal, omniscient and omnipotent entity called a 'thetan'. In existence before the beginning of time, thetans picked up and discarded millions of bodies over trillions of years.

('The genetic entity apparently enters the protoplasm line some two days or a week prior to conception. There is some evidence that the GE is actually double, one entering on the sperm side...') The GE carried on through the evolutionary line, 'usually on the same planet', whereas the thetan only came to earth about 35,000 years ago to supervise the development of caveman into homo sapiens. Thus the GE was once 'an anthropoid in the deep forests of forgotten continents or a mollusc seeking to survive on the shore of some lost sea'. The discovery of the GE (Hubbard hailed every fanciful new idea as a 'discovery') 'makes it possible at last to vindicate the theory of evolution proposed by Darwin'.

Much of the book was devoted to a re-working of evolution, starting with 'an atom, complete with electronic rings' after which came cosmic impact producing a 'photon converter', the first single-cell creature, then seaweed, jellyfish and the clam.

Many engrams, for example, could be traced back to clams. The clam's big problem was that there was a conflict between the hinge that wanted to open and the hinge that wanted to close. It was easy to restimulate the engram caused by the defeat of the weaker hinge, Hubbard pronounced, by asking a pre-clear to imagine a clam on a beach opening and closing its shell very rapidly and at the same time making an opening and closing motion with thumb and forefinger. This gesture, he said, would upset large numbers of people.

'By the way,' he warned, 'your discussion of these incidents with the uninitiated in Scientology can cause havoc. Should you describe the "clam" to some one [sic], you may restimulate it in him to the extent of causing severe jaw pain. Once such victim, after hearing about a clam death, could not use his jaws for three days.'

Does your jaw ache, dear reader?
Bwahahahhahahahaha!
Clams! And people pay to be taught stuff like this from silly lads who believe stuff like this. And they claim it is science! And a religion! Low level Scientologists are discouraged from reading this book and are told it will all be explained later when they are ready to understand the higher secrets of Scientology.

After the clam came the 'Weeper' or the 'Boohoo', a mollusc that rolled in the surf for half a million years, pumping sea water out of its shell as it breathed, hence its name. Weepers had 'trillions of misadventures', prominent among them the anxiety caused by trying to gulp air before being swamped by the next wave. 'The inability of a pre-clear to cry,' Hubbard explained, 'is partly a hang-up in the Weeper. He is about to be hit by a wave, has his eyes full of sand or is frightened about opening his shell because he may be hit.'

Progressing along the genetic time-track, evolution arrived at the sloth, which 'had bad times falling out of trees', the ape and the famous Piltdown Man, which was the cause of a multitude of engrams, ranging from obsessions about biting to family problems. These could be traced back to the fact that 'the Piltdown teeth were enormous and he was quite careless as to whom and what he bit.' Indeed, so careless was the Piltdown Man, Hubbard recorded, that he was sometimes guilty of 'eating one's wife and other somewhat illogical activities.' (Unfortunately for Hubbard, just twelve months after The History of Man was published, the supposed fossil remains of primitive man found in gravel on Piltdown Common in the south of England were exposed as a hoax. The Piltdown Man had never existed.)

The History of Man drifted into pure science fiction when Hubbard came to the point of explaining how thetans moved from body to body. Thetans abandoned bodies earlier than GEs, it appeared. While the GE stayed around to see the body through to death, thetans were obliged to report to a between-lives 'implant station' where they were implanted with a variety of control phases while waiting to pick up another body, sometimes in competition with other disembodied thetans. Hubbard revealed that most implant stations were on Mars, although women occasionally had to report elsewhere in the solar system and there was a 'Martian implant station somewhere in the Pyrenees'.

Well, there you have it. How can we deny the genius of L. Ron Hubbard? The thoughtful and useful ideas he taught the world? His obvious deep learning and careful judgement? The certain correctness and amazing insights of the basic beliefs of Scientology?

More tartar sauce with your clams?

What does Clambake mean, then?

A clambake is originally an outdoor party; especially a seashore outing where food is usually cooked on heated rocks covered by seaweed. It can also mean a gathering characterized by noisy sociability. "Operation" derives from the many criminal operations run by CoS, like Operation Freak Out, Operation Snow White, etc.

A friend on the net wrote to me:

"In my family, a 'clambake' is like a barbecue -- an outdoor party. It happens on the beach. The clams are steamed, along with some vegetables (typically potatoes and maize) in a pit covered with sand. It was my 'duty', when I was five years old, to put more sand on the pit whenever the steam leaked out. That seems to be your job now."

There is a song from the American musical comedy Carousel: 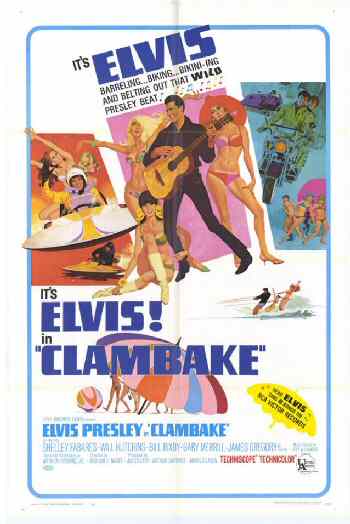 You know Elvis was in a movie called Clambake? These are the lyrics from the song Do The Clam (Wayne / Weisman / Fuller), recorded for the film "Girl Happy" with Elvis Presley:

* Do The Clam, do The Clam
Grab your barefoot baby by the hand
Turn and tease, hug and squeeze
Dig right in and do the clam


You can get your heart to spin
On the outside looking in
Moon ain't gonna last all night
Well let's work up an appetite
(Yeh, yeh, yeh)

* Repeat
Dig right in and do the clam
(Yeh)

While on the subject, could Scientology have saved Elvis? Check out this taken from MSNBC:

According to former Elvis crony Lamar Fike, Elvis stopped dating "Mod Squad" star Peggy Lipton because she kept trying to get him to join the church. "One day, in L.A., we got in the limousine and went down to the Scientology center on Sunset, and Elvis went in and talked to them," Fike said in "Elvis Aaron Presley: Revelations from the Memphis Mafia," one of several sources who say that Presley didn't like Scientology. "We waited in the car, but apparently they started doing all these charts and crap for him. Elvis came out and said, 'F - - - those people! There's no way I'll ever get involved with that son-of-a-bitchin' group. All they want is my money.' . . . He stayed away from Scientology like it was a cobra. He'd s - - t a brick to see how far Lisa Marie's gotten into it."

(No, these links have nothing to do with Scientology or CoS, they are added here just for fun)

"How do you steam clams? Make fun of their religion."

- Johnny Carson, stand-up monologue on NBC's "The Tonight Show"
Brought to you by: